In Nigeria, Must footballers ( Super Falcon) have to always carry placards before they can be paid?? In fact, this particular case is pathetic because the so-called minister boldly said that  “they were not expecting them to win? Really? Excuse me, sir just hold it there, 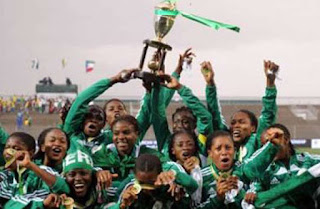 Many Nigerians think his constantly disgracing his office? sorry, his not,
Noo, he is just living out the society feeling about women, what about 70% of the nation’s thinks, feels and sees about women in there, a society in that part of the world.
Why did I say 70%, is this, take for instance in a nation where they have male/female, let’s assume male is 50% while the female is 50%,
Now my assumptions are this, 40% of the man reasons that way, why 30% of women reason in that direction making it 70% in total. (what can 30%, 10%Male / 20%female do, change, well still watching )

They never believed in women for anything, to them women means nothing to them, is not that they were not expecting them to win, the  super falcon, no matter the trophy, they are still female in that same society (NO REGARDS FOR WOMEN ACHIEVEMENT) when our male football, Super Eagles) won, many Governors and well placed Nigerians spoiled them with different types of gifts, super landed properties and trips.

Where are those Good Nigerians, because they are not male, this is the second time this female footballer Super  Falcon) are winning and they have to refuse to leave their hotel rooms before they could get a little stipend from their own government, even with the money they made for the nation, This is to show you the  level of sentiment or rather discrimination in the treatment of the male and female in that part of the world, Super Eagles and Falcons to them are not the same.
When Senator Bedouin .C. Olujimi  Senator representing Ekiti South presented a bill for gender equality in the house, many of you, even women were making jets of her in the house and outside the house that she is being too wise, a society where being wise can be a problem because is coming from a woman.

this is part of her reasons for pushing such bill, 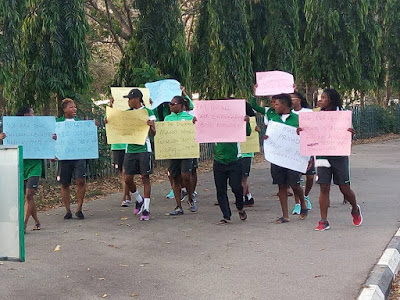 Sorry because it will still continue like this until people like, you are  ready for a change in perception. I mean the way women are perceived.

Video: See your minister of sports, Solomon Dalong here supervising the cash payment to Nigeria's U20 girls while they knelt down to count the money. Their supposed entitlement! #ThisIsNigeria

To sight a fellow woman being in agreement to subjecting other women to man inhumanity to man activity just to answer a good woman or be accepted by a few men, see women kneeling down for her entitlement, her right what she worked for . even if you doing me a favour , can you do it with some dignity nah, noo because is a women she deserves no dignity.
The way our society perceived women, to them, women are still seen as a second-class citizen, lowlifes,  whose place is only in the kitchen, unfortunately most women who have refused to remain in the kitchen are seen as being too wise why some women have taken that position with good faith, hunger or poverty they attribute it to, most men  got threaten by few women that hs stepped out of the kitchen living their lives, who  knows their worth and all they do is  call them names, but are they really them name they are been call?. Just thinking aloud oh reasoning. hahaha hahaha
thanks for stopping by
Beadys world ——————-changing your mindset
Share

Previous ZODIAC SIGNS ARE EVIL
Next IS GOD A FOOL