2023: My WAEC Certificate Is Missing, Lost And Cannot Be Found – Okowa.

Kingsley Thompson, the Chief Executive officer of a real estate firm, Not Just Properties has recounted how a client of his bought a duplex worth 125 million naira for his girlfriend who hails from Edo State.

Thompson via his Twitter handle (@justkingss) said he was surprised to find out that the property he was about to purchase wasn’t even for his wife but for his 19-year-old girlfriend who hails from Benin.

He added that the client had purchased the duplex as a birthday gift for his Benin girlfriend.

Kingsley’s Tweet reads thus: “I helped a client secure a N125m Duplex in Lekki. The funny part was that he actually bought it not for himself nor his wife but for his 19yr old Benin (Edo State) girlfriend.

“He bought it as a birthday gift to her because of pus*y.

“You see all this under 23 girls fear them Kings! They are not joking o. They are playing bigger leagues, if you’re in Lekki you’ll understand what I’m saying…if they say they will deal with you, sure they will.

“Their boyfriends are top rich men. They don’t date middle-class men or young boys except yahoo boys only.” 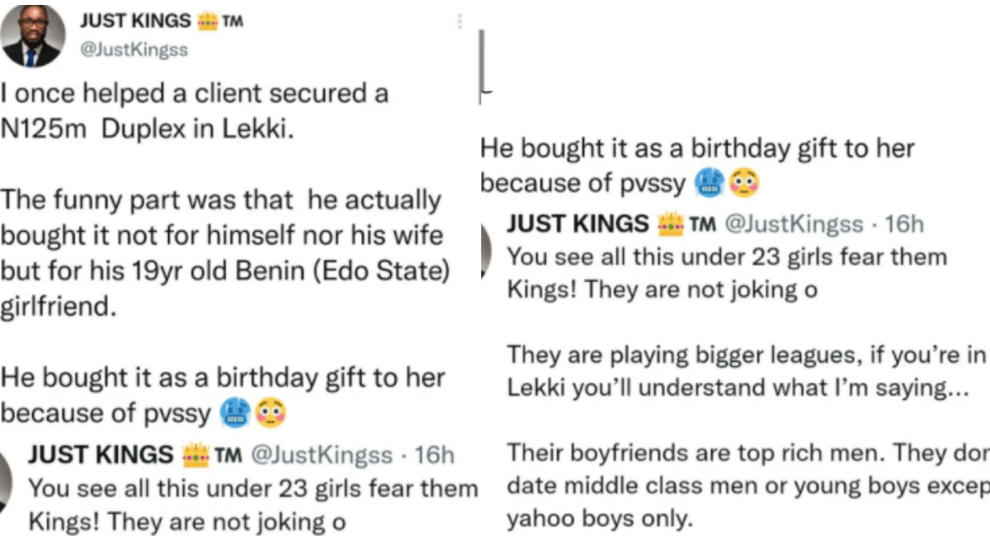 Why Peter Obi should accept to be my running mate — Kwankwaso